GOATMILK introduces its original and exclusive month long series entitled “Muslims Talking Sex” featuring diverse Muslim  writers from around the world discussing a gamut of topics in their own unique, honest and eclectic voices.

Much Ado About Nothing: the Hymen 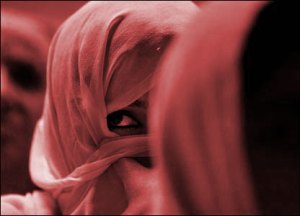 Riddle: If you’ve got this, you can’t share it. If you share it, you haven’t got it.

The actual answer to this riddle is “a secret.” But the case could be made for an alternative answer: the hymen.

Women are taught that our hymens are a secret: a gift representing our virginities that we should never share with anyone but our husbands. Instead of being a gift, however, it really functions more as a curse. Our early lives are often shaped around the hymen and its protection: we may be kept from playing sports, using tampons, having male friends, and riding horses for fear that our hymens may break (or be broken) and our virginities rendered void.

What is all this commotion over a hymen? MedicineNet defines the hymen as a “thin membrane [that] completely or partially occludes the vaginal opening. The hymen is a fold of mucous membrane usually present at birth at the orifice of the vagina.” WebMD’s definition is similar, stating that the hymen consists of a “thin, membranous fold of highly variable appearance that partly occludes the ostium of the vagina before its rupture (which may occur for a variety of reasons). It is frequently absent (even in virgins), although remnants are commonly present as hymenal caruncula tags.”

Notice both definitions admit that not all women are born with hymens. Hymens are as varied as women themselves: some hymens never come to be, some are so delicate that they tear without cause, some are so stubborn they must be surgically removed for a woman to have intercourse or give birth.  Despite the fact that hymens are too varied and unreliable to serve as an indicator of virginity, this is precisely how they are used.

Virginity is also synonymous with the female gender. When you think of a virgin, your thoughts most likely automatically go to a young woman—never a man. This touches on a serious problem within all communities, but especially Muslim communities: sexual double standards. The fact that a young man can get freaky with anyone he deems suitable and still be an acceptable candidate for marriage (maybe not the most desirable, but acceptable) is troublesome when his sister faces rumors, slander, and rejection from suitors, friends, community members, and even her own family if she does the same thing as her brother.

I’m sure everyone remembers the French divorce case where a Muslim husband sought to divorce his wife because she “faked” her virginity. This case was problematic from all sides: a wife was untruthful with her husband, and a husband wanted an intact hymen more than he wanted a wife. This case illustrates that many Muslims are unable to talk openly about sexuality with their loved ones and that we’re equating virginity with perfection, going to extremes in search of it.

In March of 2008, a Jordanian man shot his sister and her boyfriend, killing them both, because her family suspected that she was no longer a virgin. Forensic tests conducted after her death revealed that she was a virgin when she was murdered. So her brother killed two people based on…what? A rumor? Gossip?

This isn’t the first time that rumor and gossip have murdered a woman, and it most likely won’t be the last. Lina Nabil, a journalist whose brief prison sentence in a Jordanian jail revealed that the overwhelming majority of her cellmates were being held for their own safety because they were thought to no longer be virgins, realized that false accusations fuel a majority of virginity-related honor killings. And if a woman is no longer a virgin, what is she? She’s still a living, breathing person. Is a hymen worth more than a life?

These murders don’t just happen in Jordan. They happen anywhere that a woman’s virginity is prized and considered to be an important part of her feminine charm. These murders can happen everywhere until we rethink the importance we’ve placed on a hymen.

Hymen reconstruction surgery (commonly known as “hymenoplasty”—it’s the surgical restoration of the hymen) is another worrisome outcome of our obsession with hymens and virginity. Recent news stories from outlets such as Reuters and the New York Times highlight the increasing popularity of hymenoplasty among women in Muslim communities.

If it’s to the point where surgical reconstruction of a hymen seems like a better idea than owning up to the fact that one has had sex, for whatever reason, we’re in a lot of trouble. We have to rethink our priorities. Which is more important: a smart, caring, kind partner/wife, or a woman with an intact hymen?  When we care more about a fuzzy idea of virginity than what kind of person a woman is, we have a seriously skewed idea of women, their value, and their sexuality. A relationship is between two people, not between a person and a hymen. An intact hymen doesn’t guarantee fidelity, fertility, or friendship—and in our era of hymenoplasty, it doesn’t even guarantee virginity.

It’s time to do some serious thinking, folks. We have to start asking ourselves why we let men get away with premarital sex without a scratch, but why we force women who behave in a way we don’t like into shame, isolation, or death because of our gossip, rumors, and judgments. It’s time that all of us measure a woman by who she is, not what is (or isn’t) between her legs.

Fatemeh Fakhraie is an editor, writer, and blogger who writes about issues from her perspective as Iranian-American Muslim woman. She writes about Islamic feminism, Islam, and race for several online and print outlets, including Racialicious, Bitch magazine, and AltMuslimah.

In 2007, Fatemeh founded Muslimah Media Watch, a website dedicated to critically analyzing images of Muslim women in global media and pop culture. She currently serves as editor-in-chief of the website.

38 thoughts on ““Muslims Talking Sex” Series: Much Ado About Nothing- the Hymen”